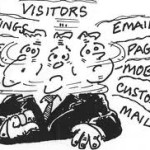 You have more to do today than you can squeeze into a single eight hour day. (Join the club)

Throughout the day you’re faced with many varying and unplanned demands on your time. (And your point is?)

You basically live inside of Outlook (any mail client qualifies for this rant) yet the number of the incoming messages outpaces the processing you can do. (Can I get an amen?)

While I have some work habits that are helping me process my Inbox down to zero each day (which I’ll share in a future post) this message is about a self-induced distraction that compounds the problem, which everyone can avoid.

While speaking with an IT friend of mine a few weeks ago, he commented that he didn’t necessarily like the “Live Tiles” feature of the new Windows 8 / Windows Phone 8 OSs. While that’s certainly touted as a great feature by most, I had the sense that he was right when he described the interface as “a continuous distraction”. Now…I really like the idea of live personal dashboards…though I’ll admit I don’t really know what information or metrics MY dashboard should have on it. But as an IOS user (iPhone 5 and iPad Mini) I have tired of the fact that almost every last app wants permission to notify you about something. If your phone pings or buzzes with every text, email, weather alert (for EVERY location tracked), re-tweet, Facebook “Like”, friends logging/checking  in/out, etc…etc…your battery and sanity aren’t going to last long.

Back to email and a feature that I really think ought to be turned off. While it seems logical that the “New Mail Alert” popup can help you be more responsive, my advice is…turn the bloody thing off.  Why Al…don’t you want to know immediately when you get an email from me so you can be responsive? Ahh…no.

I average over 80 emails a day from colleagues in my company alone. Let’s say it averages 5 minutes each to read, respond, schedule to deal with later or file. That’s 6.66 (hmm) hours per day just dealing with colleague email. And… more than 80 times a day that I’m going to stop what I’m doing to read an email. (The irony is…for some…that means they stop reading an email to read another email!)

A few years ago I read somewhere that having the “You’ve Got Mail!” popup turned on affected your concentration in the same way as drinking two alcoholic beverages would. (No “Mark”…it’s not ok to drink at work if you turn off email notifications.) I lost track of that study a long time ago, but recently ran across some research by Michigan State University that I’m going to use to support my point.

One of the questions the researchers wanted to answer was, “…how minimal such an interruption can be and still affect the train of thought.” Their conclusion was that an interruption of less than 3 seconds (about the time it takes for your email notification to fade in, then fade out) doubles the chances of an error in any task involving a series of steps. It’s triple if the interruption is 4.4 seconds long. Bottom line…you’re going to lose your train of thought.

(You should be right-clicking to disable email alerts now but, if you need proof, the research report can be found here.)

Alright…still have nagging doubts about your responsiveness? I did too at first. But I’ve used an Outlook plugin for several years now that provides me all sorts of stats on my email. I can see rankings on who sends me the most email…who I send the most email to…what my response time is to email…on and on it goes. The result of turning off email notifications?…my median time to respond to internal emails is 1h 2m if I’m on the To: line. Time to respond doubles if I’m CC’d. Now, in the case of CC’s, that’s only on the CC’s that I respond to. My general rule is that I’m not expected to respond if I’m only copied. But over a recent three month period, I responded 647 times anyway. Keep in mind that about half of the incoming mail is from other countries…other time zones.

I can hear you thinking…hey…it takes days for Al to respond to my messages. Well, it could be that my system (which has some imperfections) failed me, or it could be that I just don’t like you.

I’ll leave it with you to decide but, while you’re pondering, how about turning off that notification…you probably won’t be getting one from me anyway.

« A Starbucks tip for International Travelers
Pessimist vs. Optimist »